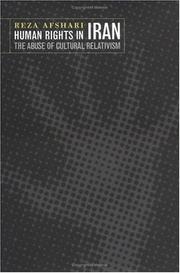 Published July 2001 by University of Pennsylvania Press .
Written in English

Until We Are Free is the memoir of Iranian human rights lawyer, Shirin Ebadi. It spans the years from (when she won the Nobel Peace Prize) to the present day, when she lives and works in exile. This is a very straightforwardly written, readable account and, despite there being plenty of shocking events, Ebadi never sensationalises her story/5. This book provides the first comprehensive assessment of the contribution of the United Nations to the human rights situation of the Bahá ís in Iran. It does this by examining the theoretical, legal, institutional and political dimensions of this issue in detail. The situation of the Bahá í community in Iran between and provides a particularly good test case for the international 5/5(1). Human Rights in Iran The Abuse of Cultural Relativism Reza Afshari. pages | 6 1/8 x 9 1/4 Paper | ISBN | $s | Outside the Americas £ Ebook editions are available from selected online vendors A volume in the series Pennsylvania Studies in Human Rights View table of contents "The most exhaustive treatment of the record of human rights in . Until We Are Free: My Fight for Human Rights in Iran Hardcover – March 8, keep pushing for the most basic rights.”—The New York Times Book Review “Shirin Ebadi is quite simply the most vital voice for freedom and human rights in Iran. Cited by: 2.